… everyone ought to spend a few days in a wheelchair or scooter, just so they can see what we all do and few us ever recognize ourselves as doing.

Hear hear. Even though I do not need a chair as yet, sometimes using a cane to walk is similar if to a lesser extent.

Huh. Maybe my LJ has done me some good over the years since I started it in 2002.

I wrote the following at about 4 am on my iPhone in WriteRoom and saved it to my DropBox, thus making it available to me here on the mac:

I often have an urge to walk and walk in the cool night air, as I used to when I was younger. I have always had nocturnal tendencies, often sitting or lying awake for hours when too young to go out alone, reading or just 'day'dreaming. Then, when away from home at one or another christian camp and later at university, I started to go out and walk. Many poems, songs and prose pieces were composed during these walks. Some were subsequently written down but many exist only in my failing memory.

Tonight I am tempted to go outside and sit on the picnic bench that one of the neighbours has installed on the communal grassy area in front of the flats. There are two street-lights right there and it would be plenty light enough for me to sit and read, write or knit. I know that I am (sadly) not up to rambling around on my own these days, not during daylight and definitely not during the night hours, other than in the fictional worlds of the World of Warcraft. To be honest I am not sure that going down the two flights of stairs to sit at the bench would be such a good idea - the palaver needed to gather together what I might need and the two flights of stairs back up to the loo are quite intimidating if I am totally honest with myself.

So I will stay indoors in my room (that is at 28°C even at this hour and with the fan running) and read, knit and perhaps play WoW whilst trying not to think about how my horizons and boundaries are contracting as the multiple sclerosis progresses and as I begin to get "old". 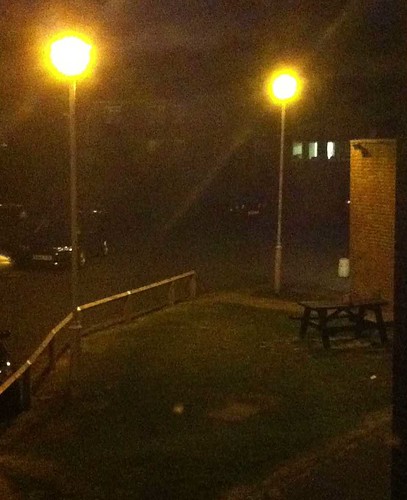