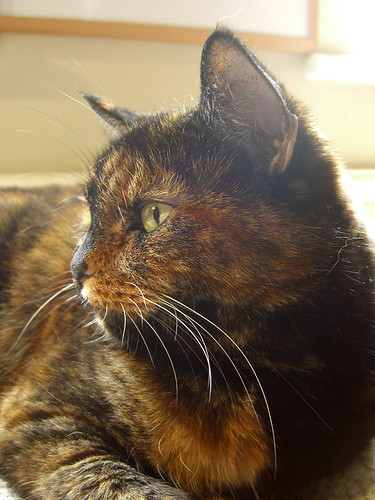 Hubby took Smudge to the vet this morning because she has not been eating and has lost a lot of weight (about a third of her body weight since last vet weighing, apparently). She has been drinking an ocean at a time and weeing for England.

Apparently the vet wanted to keep her in but there is no way that we can afford that. The bill today was £150 and that would have made it £300.

They gave her an injection of steroids, pushed some fluids into her and a jab for old cats (that is what I could gather from hubby). She did not really eat this morning, even her favourite tinned-tuna-in-spring-water but once they got home she devoured some and so the fluids and steroids must have helped.

We apparently need to get a urine sample from her which they would have done at the vets had hubby been able to afford for her to stay there. Currently both cats (Smudge and Pixel) share a litter tray but apparently we need to get another tray, use special vet-provided litter and watch it closely so that only she uses it (Pixel will prefer his own, to be honest - but I have no idea where we can put it - space is so tight) and, when she does, we use the provided syringe to get a sample.

So, I know last time that I asked for donations on her behalf did not garner any donations at all, but, if we could raise enough for her to stay at the vets over night, we would be able to get that urine sample (and any other tests that they want to do) so much more easily. I will be signal boosting this plea for donations everywhere that I can and would appreciate signal boosts from all of you if you cannot afford to donate (and I know that times are hard for us all right now).

This is my PayPal donation button. Anything that enters my PayPal in the near future will be used for Smudge's care, be that from donations or pattern sales on Ravelry.

UPDATE: She has been put to sleep. There was nothing that could be done and she had stopped eating or drinking.

End stage (stage four) renal failure. There may be some medication options but mostly it is just cuddle her lots and quality time. They do not seem to do the pushing fluids thing over here that two of you have done for cats in renal failure in the US - either that or she is just beyond that. Apparently she will not be in any pain and, while we can keep her interested in some food (she is on tuna tinned in spring water right now which she loves), we do not need to consider euthanasia for now. That means that vets bills will not be huge but we still cannot really afford *any* vets bills to be honest.

P.S. Thank you all for the donations. If we do not need it for Smudge's care we will donate it to the Cat's Protection League.

UPDATE: She has been put to sleep. There was nothing that could be done and she had stopped eating or drinking.