ETA: Ravelry have decided to delete my pattern there that links here because it is not all my own work. One person has already cast on and many have queued it. My message to the person that has cast on and my updated description on the pattern there (which hopefully people will see on their queue before it is deleted:

Please note that Ravelry are going to delete my pattern because it is too derivative of “Fetch !” (i.e. not all my own work – isn’t all knitting? LOL). It will stay on my blog though at Dog Bone Knitted in-the-round (links here) 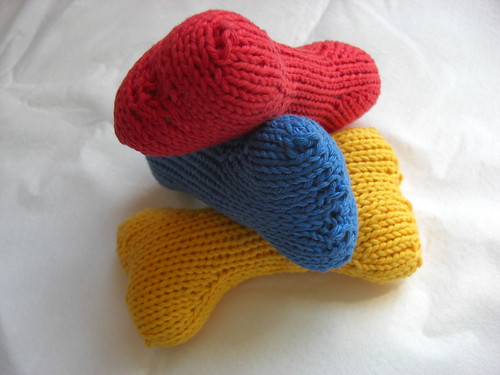 This is an adaptation of “Fetch !” by Kris Knits so that I could knit it in the round. Having knit one “Fetch !” flat, as the pattern states, I realised that my seaming/sewing would not make for as ‘clean’ a finished bone and so I spent a bit of time developing an in-the-round version of the pattern. I also found the finishing bone-end to be longer than the start-end and so adapted the rows knitted so that the ends matched more symmetrically. What? Me a perfectionist? LOL!

I have contacted Kris on Ravelry, her blog and by email asking if she would like to add my pattern version to her pattern and asking if it is okay for me to publish this but I have not had a reply as yet. I finished this about a week ago and so I am publishing it while I remember to (and so that I can update my Ravelry project to point here instead of to “Fetch !”). 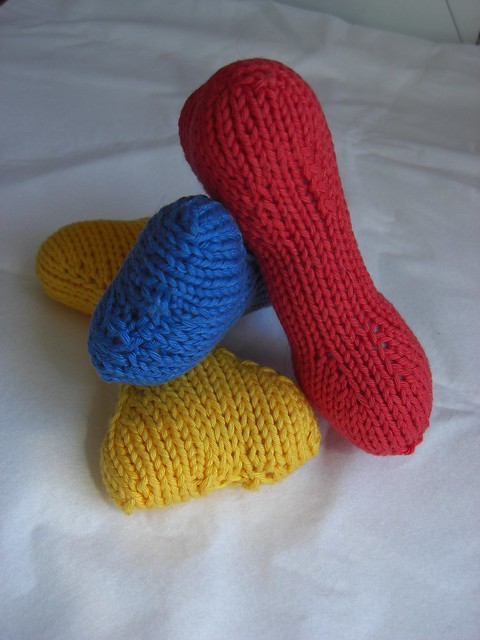 Pattern:
CO 12 sts for magic-loop on a circular needle with the needle-tips together so that 6 st are on each needle-tip using Judy’s Magic Cast On or similar.

CO 12 more sts on the needle in the same way as before.

Repeat rows 1-3 but don’t break the yarn (I slip the other 16 st to keep the magic-loop functioning).

Join yarn to remaining 16 sts and repeat rows 41-42 (but without slipping any stitches of course).

my Ravelry project using this pattern